Yellow fever is a viral disease that is endemic [1] in Africa and South America and transmitted to humans by the bite of female mosquitoes of the Aedes species in Africa and Haemagogus species in South America. In tropical regions during the rainy season, large numbers of mosquitoes breeding in tree-hole water permit primary transmission of the virus from infected monkeys to humans, which then can be further transmitted from human to human.   In heavily settled urban areas yellow fever is transmitted from person to person via the bite of mosquitoes that typically replicate in standing water. 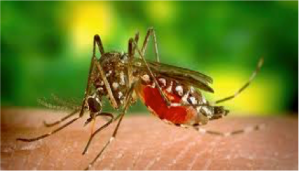 The Yellow Fever causative virus is a member of the Flavivirus family, which also contains other well known viruses such as Dengue and West Nile. The Flavivirus family contains at least 18 other viruses that cause human disease with exotic names such as Banzi, Bussuquara, Sepik, Wesselbron, Kyasanur Forest Disease, Negishi and Spondweni!

The bite of an infected female introduces about 1000 to 100,000 virus particles under the skin where replication occurs inside of host cells before spreading via the lymphatic system and bloodstream to the major organs. Symptoms of Yellow Fever start after an incubation period of 3 to 6 days and most non-vaccinated people living in endemic areas will suffer a mild infection presenting with fever, chills, backache, headache, nausea and vomiting lasting 3 to 4 days. No jaundice is seen. This acute phase is followed by a period of remission of about two days where symptoms abate and recovery is seen. However, in about 15% of individuals in whom recovery seems apparent, a second ‘toxic’ phase occurs. Symptoms of this toxic phase include recurring fever, nausea, vomiting, liver injury causing jaundice (hence yellow fever), kidney injury associated with low urine output, and susceptibility to bleeding, which characteristically results in a black vomit due to stomach bleeding. Death generally occurs 7 to 10 days after onset of toxic symptoms due to multi-organ failure. Death occurs in 20-30% of native Africans who enter this toxic phase, and in 50-60% of native South Americans. Surviving the infection confers life-long immunity and typically no permanent organ damage occurs.

It is believed that Yellow Fever originated in Africa and was likely introduced into Europe and the Americas during the slave trade in the 16th century. The first definitive report of Yellow Fever in the Americas was in 1647 on Barbados, followed by the Yucatan in 1648 where the Mayan population called the disease xekik – blood vomit. In 1685 Recife, Brazil, reported its first epidemic. North America has documented several major epidemics of Yellow Fever since the 17th century when, at that time, it was deemed as the one of the most dangerous infectious diseases in existence. In 1693, Boston was the first British colony in North America to suffer an outbreak of the disease, with a large outbreak in Philadelphia in 1793 forcing George Washington to flee the city.

New Orleans experienced two major epidemics in 1833 and 1853. The 1853 outbreak claimed 7,849 residents of New Orleans – about 10% of the population, mostly immigrants and so was also known as ‘Stranger’s Disease’ along with ‘Yellow Jack’, after the practice of draping areas in quarantine with yellow flags. Citizens were not alerted after more than one thousand people had already died.   Purportedly the business community feared that word of an epidemic would result in a city quarantine to avoid spread of the disease upriver from New Orleans to other cities along the Mississippi. This epidemic was featured in the 1938 film ‘Jezebel’ starring Bette Davis. As today, there were no treatments for Yellow Fever, and physicians experimented with a variety of approaches including copious blood-letting and large doses of mercury! Accounts from individuals present in New Orleans depict a very grim picture of a disease ridden city filled with the stench of dying and dead bodies in the heat of the 1853 summer. 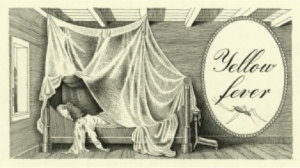 In 1881, a Cuban physician, Carlos Finlay, proposed that Yellow Fever might be transmitted via mosquitoes, but received a cool reception from the medical community at the time. A team led by the now famous Walter Reed, prompted by heavy losses from the disease in the Spanish-American war, finally confirmed Finlay’s hypothesis of mosquito transmission in 1901. This confirmation of Finlay’s proposed mechanism of disease transmission subsequently led to the eradication of yellow fever first in Havana and then later during the construction of the Panama Canal.

The Yellow Fever virus was first isolated in 1927 from a diseased patient in Ghana. This led to the development of a vaccine in 1936 by Max Theiler, a South African microbiologist working at the Rockefeller Institute, who received the Nobel Prize in 1951 for this achievement. Immunity against all forms of the virus occurs in nearly 100% of vaccinated individuals, lasting for at least 10 years. Since World War II, mainly because of effective vaccination programs, Yellow Fever is rarely seen in Europe and North America and only in returning expatriates and travelers to Africa and South America. Yellow Fever has never appeared in Asia. Today, there still is no specific antiviral therapy and treatment of Yellow Fever is based on providing supportive measures such as providing fluids and oxygen, maintaining adequate blood pressure, replacing blood loss, providing dialysis for kidney failure, etc.  Although management of patients can be improved today by modern intensive care, travelers hospitalized after return to Europe or the U.S still may not survive.

[1] present in a self sustaining, relatively constant rate